Virtual Storage, not just another V-word

In the realm of storage, I have spent most of my time outside of the storage box, especially how storage networking, servers and operating systems (OS) impact storage.  I began working with Cisco and VMware long before the VCE initiative.  Some of the broad industry trends that we have seen across the OS and network stacks are also applicable to the storage layer.  Pat Gelsinger, EMC’s President and Chief Operating Officer of Information Infrastructure Products, spoke today with a group of analysts to lay out a vision for Virtual Storage.  The audio and slides of Pat’s presentation can be seen here (may request your email address to view).

This strategy relates to Private Cloud. If you look at the diagram below, virtual storage lives in the virtual information infrastructure layer. 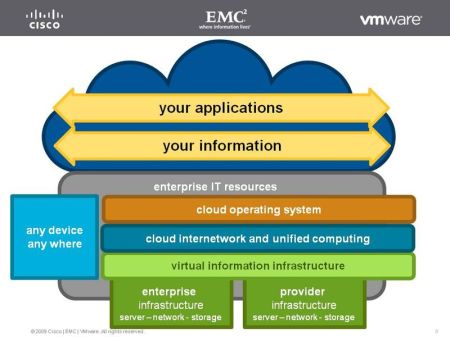 To understand the trends, let’s look at the OS and network layers of this stack.

Server Virtualization is much more than hypervisors

The first thing that most people think about when they look at server virtualization is how it can help consolidate resources, which leads to a reduction in hardware and therefore to savings in power and space.  When I think back to my first interactions with VMware in 2003 (when I was in EMC’s E-Lab), it was actually the abstraction/isolation of an environment that was so useful.  Old operating systems (Windows NT) or “odd” environments (FreeBSD) could be put in a VM and EMC’s storage could then support the configuration.  In addition to extending the life of an existing configuration, VMware is tremendously valuable for test and development environments.  Around the time that we were first working with VMware, they came out with a product that everyone thought was magic when they first saw it – VMotion:  Live Migration of a virtual machine.  The liberation gained with this feature turned a useful/interesting product into a game changer.  Individual server resources could be turned into a pool of resources.  With the addition of VMware Distributed Resource Scheduling (DRS), VMotion becomes automated.  As a final note here, take a look at some of the plans around extending VMotion over distance that were discussed at VMworld last year.

As with server virtualization, the first step towards network virtualization is consolidation of resources.  With the adoption of 10Gb Ethernet and storage protocols such as Fibre Channel over Ethernet (FCoE), iSCSI and NAS, we reach a single network for LAN and SAN traffic: a building block of the private cloud.  In particular, FCoE allows existing infrastructures built on FC to move towards a unified environment.  Another enabler of cloud internetworking is Cisco’s Overlay Transport Virtualization (OTV) which they unveiled last month.  OTV allows for mobility of resources across datacenters or with a compatible service provider.  OTV leads networking down the same path of automation and mobility that we have taken with server virtualization.

Virtual Storage, not just another V-word

As my mainframe friends have told me, virtualization is not a new idea, and storage virtualization has been available from EMC and competitors for many years.  Similar to what is happening in the OS and networking stack, Virtual Storage goes beyond the basic functionality prevalent in the market today  by adding flexibility and automation.  The goal is to transform individual storage resources to a pool using Federation.  As defined on the Wikibon site, Federated Storage enables a “loosely coupled set of storage resource nodes to act unilaterally and still be managed centrally, organizations can create networks of virtually limitless capacities and eliminate disruptive migrations”.  While many vendors may be working on federation, Pat Gelsinger discussed EMC’s vision, in which an enabling Distributed Cache Coherence technology allows for Global Federation.   In a recent Forbes interview, Pat discussed the value of leveraging federation over distance:

“I want to flexibly move those across shared infrastructure, which can drive up the utilization dramatically. I also can get load balancing across data centers, do mainframe-like high-availability and failover. I also can build a cloud-like architecture that’s private and then federate from my private cloud to my external environment, where I can have spillover.”

Similar to what we’ve seen in the OS and networking stack, virtual storage will allow the use of both old and new resources, regardless of location – providing an onramp to adoption of a Private Cloud model.  As Chuck Hollis has said: “And maybe we can start thinking entirely differently about that age-old catch phrase of “IT delivered as a service”.”

Comments are always welcome.  You can be sure that we’ll be talking a lot more about this at EMC World, May 10-13 in Boston.  I will be presenting Converged Data Center: FCoE, iSCSI, and the Future of Storage Networking.  Any bloggers that are attending should sign up for the Blogger’s Lounge.  Hope to see you there.

This entry was posted on Thursday, March 11th, 2010 at 2:00 PM and is filed under Uncategorized. You can follow any responses to this entry through the RSS 2.0 feed. You can leave a response, or trackback from your own site.

8 Responses to Virtual Storage, not just another V-word