Warning: The Internet May Cause Distraction and Inability to Learn

If Nicholas Carr is correct in his recent book, The Shallows: What the Internet is Doing to Our Brains, you will not read this entire blog post. The main idea of the book is that the internet causes our brains to be easily distracted and also makes us less able to learn deep ideas as we skim more and read deeply less.  The book digs into the science of how the human brain learns.  The brain has “plasticity” – meaning that it will adjust to the activities that it does often, similar to what our muscles do.  Carr lays out the history of communication from the first written world, through the mass production of books, to the internet age and analyzes the impact that these technologies have on society and the human brain.  As he points out in the book, for every new technology, there have been those that have said that it will doom the way that we think or take away the very things that make us human.  But this time, according to Carr, there are real issues.

Like the dog Dug in the movie Up! (SQUIRREL!) – internet users can find it hard to stay focused.  While I agree that almost any repetitive activity can potentially become addictive, I believe that most people can take control of the tools that they use for communication rather than letting them control you.  Even in pre-internet days, the draw of interrupting technologies was there – do you finish the task that you’re working on, or answer the ringing phone or watch TV (or even read a book)?  The brain can get so used to a stimulus that it will make you crave it when it’s not there – this even affected Dilbert back in 1996.

The difference with the internet is that it is everywhere and people can become like a mouse pressing a lever for a pellet by constantly checking email, RSS, Facebook, or Twitter.  These activities can be properly worked into the flow of the workday rather than as a distraction from getting things done.  Personally I know that I have a tendency to want to stay connected and respond rapidly to messages. (Disclosure: Hi, I’m Stu and I’m an internet addict, see me on Twitter)  The more we allow ourselves to be interrupt driven, the more our brains will see that as “normal” and it will become harder to stay focused for longer periods of time.  Recent studies (including some in the book) show that the cost of context switching is larger than any gains for multitasking.  You have the power to take control of your environment: finish conversations without interruption, check messages when you’re done with a task, not when an alarm tells you that it comes in.

If you’ve read this far, congratulations!  In the age of the internet, most people skim rather than read.  The book describes that people read in an “F” shape, that is that they read the first line or two, then partial lines and eventually just start scanning down the page.  As a blogger, I try and keep my posts short (500 words for most posts or 1000 for a deeper discussion) and also try and break up the text visually with some bolding, italics, headers and photos.  Carr also says that even the basic web format with hyperlinks is very distracting.  Each hyperlink that you reach makes you think about clicking it and if you do will you ever get back to where you started (for this article, I put some links at the bottom rather than throughout the text).  There is fascinating research in the book which explains how memories are created and the science behind short term and long term memory.

While in general I feel that Carr is a bit of a pessimist about technology, I do believe that he is correctly raising an alarm on this topic.  The argument in the book is that as we skim more and rely on the internet to store information rather than our brains that our brains will have less context for problem solving or deep thoughts and that we become shallower.  Mass production of books brought learning to everyone, the internet increases information flow, but potentially we understand and internalize less.

There are a few ways that we can still absorb information in the internet age.  Of course the first is to read deeply – I’d recommend picking up The Shallows if you’ve found this discussion interesting (I think that it should be required reading at colleges). Another way is to write; the process of organizing your thoughts and translating them into words helps your memory and critical thinking.  A third way is to have deep discussions with friends and family – nothing like a lively debate to get the brain going.  A final way is just to give yourself some free time to think – where new information isn’t flooding in so that you can sort and process what you’ve brought in.

I consider myself a pragmatic optimist on the new technologies.  Like some of the optimists in the articles listed below, I believe that the internet age brings proliferation of information and opportunity for a globally connected community.  It’s the core of the company that I work at now.

Where do you stand?  Are you an internet optimist? Do you believe that there is validity in Carr’s positions?  Will the internet turn people into shallow shells that can’t function without computers?

Here are some related articles that I’d recommend:

Are You An Internet Optimist or Pessimist? The Great Debate over Technology’s Impact on Society by Adam Thierer  (Adam also reviews The Shallows)

Carr’s article from The Atlantic: Is Google Making Us Stupid?

Does Multitasking Lead to a More Productive Brain? from NPR

Added May 2013: The Shallows cartoon edition 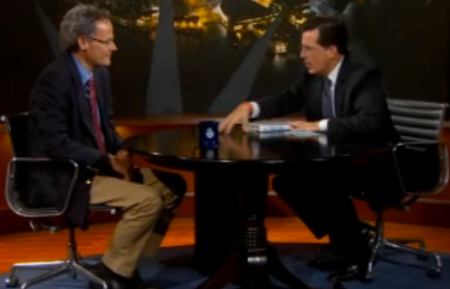 Nicholas Carr on The Colbert Report

Amusing Ourselves to Death

One of my favorite things about social media are the little things like finding new music or a good book recommendation.  The following Twitter post from Andrew McAfee last month caught my eye:

I had just reread Huxley’s Brave New World, and the quote struck a cord with me.  I did a quick search and found that the quote came from Neil Postman’s book Amusing Ourselves to Death. I bought it and found it to be a fascinating read.  The first half of the book examines some of the history of communication.  In social media spaces, there is an ongoing discussion that the communication content is much more important that the technology (but there is a lot of discussion about the various tools and the appropriate use of the tools).  Postman writes that while the message is an important piece, it is impossible to not have the message effected by the medium through which it is transmitted.

The book is primarily a criticism of television and in the introduction, Neil’s son reflects on how his father may have considered the technology changes that have come in the two decades since the book’s publication in the mid-80’s.  Many of the basic questions about the utility of technology hold true throughout the ages.  He quotes Henry David Thoreau on the building of telegraph lines:

“”We are in great haste to construct a magnetic telegraph from Maine to Texas; but Maine and Texas, it may be, have nothing important to communicate…We are eager to tunnel under the Atlantic and bring the old world some weeks nearer to the new; but  perchance the first news that will leak through into the broad flapping American ear will be that Princess Adelaide has the whooping couch.”

The same concerns held for television and many have made similar attacks against Twitter and other web tools.  I plan to take a couple of posts to look at the internet age as an extension of Postman discourse on the Television Age.  As Nicholas Carr wrote, in the age of Google, many have trouble focusing (and I would add that most don’t find the time) on anything more than a paragraph, so I’ll try to keep the posts short. While Web 1.0 is an extension of books, radio and television (1-way communication), Web 2.o is a continuation of the telegraph, telephone and email (2-way communication).