A theme that I’ve heard many times at business and innovation conferences is that the large organizations kill passion and stifle innovation. At last year’s BIF-7 conference, I asked Dan Pink, author of Drive and A Whole New Mind, if large companies can innovate and he said, “No”. At the World Business Forum last year, Jack Welch said that the argument of companies innovating is a red herring; he said that it is people who innovate. At the recent Dell Wyse CIO Summit 2012, Paul Maritz stated that one of the biggest challenges of a public CEO is keeping the passionate, high-performing employees from leaving. Paul Maritz ran a 10,000 person division of Microsoft, was founder and CEO of a small startup (Pi Corporation) that was acquired by EMC, became CEO of VMware (which has grown to over 11,000 employees) and now moves back into EMC to become chief strategist. He said that the goal of a company is to help people feel that they are doing important work as part of a shared effort and that the structure of the company is helping rather than hindering progress. Size of a company is an obstacle and Maritz states that companies over 20,000 employees are never perfect.

I’ve worked at companies large and small and the balance of process and productivity is a tough balance regardless of size. Some thought leaders and authors have written that the industrial era reporting structure should be abolished. While it sounds promising overhaul management, it is the lack of management oversight and checks and balances that led to the Enron scandal. Paul Martiz stated that the number of people where dysfunction (my word) starts outweighing productivity is 20,000; others have stated that anything larger than a military battalion (around 1000) cannot all be motivated towards the same goal efficiently.

Passionate communities are tough to maintain. Early adopters move on to the next great thing, events lose steam over time and love of brands has a short half-life. The VMworld conference is my favorite show of the year, mostly because it brings together such a passionate community. The bloggers, entrepreneurs, engineers and thought leaders are so diverse and engaging that for the third year in a row, I left the show with my brain full, feet aching and voice shot from non-stop talking. This was the first VMworld that was over 20,000 attendees. While no event of this size is going to keep everyone happy, I have been hearing some rumblings from a number of constituents that the event organizers need to watch out for. First of all, I heard from a number of end-users that there were many sessions that did not meet expectations. A number of the sessions were reported as being too basic, too marketing/product focused or just too boring. I know many passionate vExperts and bloggers that have been calling for a VMworld unconference for the last 2 years to deliver proposed sessions that for one reason or another don’t make the cut. While VMware has to keep its sponsors happy, there’s usually a big gap in passion and delivery between a vendor-assigned presentation and one from a volunteer that shares what excites them. One of VMware’s greatest assets is the halo that the company gets due to the passion of the various communities (VMUGs, VCPs, vExperts, etc); this must be upheld to win the battle against Microsoft and other challengers. 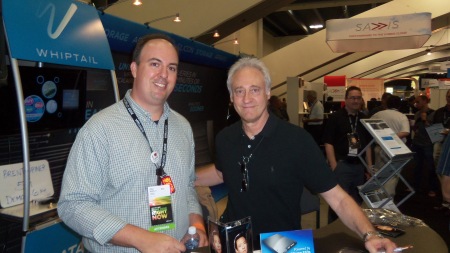 Brent Spiner was the big geek draw at the VMworld 2012 booths, proving that Data was at the center of everything 😉
Thanks to @geekazine for the photo

Whether you were at VMworld or not, check out the full coverage of videos and articles from SiliconANGLE and Wikibon on our curated VMworld 2012 page. Networking had huge buzz at the show due to the Nicira acquisition and theCUBE got an exclusive interview with co-founder Marin Casado, see my article here. I also did videos with EMC TV (watch here – interviewed by Matthew Brender) and TechTarget (watch here – interviewed by Colin Steele).

Thanks everyone for the conversations and interviews at the show! As always, feedback and questions welcome.